The Story of Nyx: The Tiny Orca and Accidental Farm Mascot

Nyx was one of three weighing in at 4 lbs when she was born compared to her 11 lb sisters it was obvious that little Nyx wasn't meant to be an outside goat. She was born around the time I was doing a school project on raising bottle babies which made finding buddies for her rather easy, but there was a slight problem... she was smaller than the babies that were 24 hours older than her. However that didn't stop everyone from claiming her as their favorite. Before everyone knew it the little black and white paint became the mascot of our farm, placing first over Panther Lily on the top 10 most popular animals on the farm. She even became the farm's unofficial therapy goat, supplying endless goat cuddles whenever we need them. Although she's grown out her Orca face and is slowly catching up to the other babies her age, Nyx is a doe that has a special place in all of our hearts and because of that has a forever home with us. 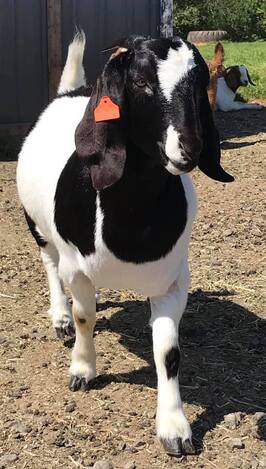