Star is one of our foundation does and quite possibly the coolest goat to ever live. For those of you who have ever met Star, you know what I mean. Star is one of those goats that draws your eye even when she's in the middle of the herd. She is a big boned, heavily muscled girl and passes that on to her kids.
She won Grand Champion Senior Percentage Doe, Grand Champion Overall Percentage Doe and Reserve Champion Supreme Meat Goat Doe in the 4-H Division at the 2013 Clackamas County Fair. Two of her daughters also earned us Grand Champion Produce of Dam and Star and Abby also earned Grand Champion Dam and Daughter.
She has consistently given us amazing kids, whether they are does or wethers. 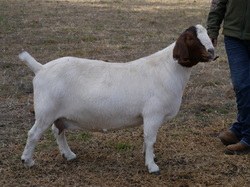 Halie's Abby          Born: 02/16/11         USBGA#130701458
**UPDATE: Abby won the Supreme Doe Title at the 2014 Clackamas County Fair**
Abby is the first kid born out of our doe, Star. She is an impressive doe with the same muscling and bone structure as her dam. Abby brings a little more height and length to the table than her mom. She has thrown some impressive does and wethers for us.
Last year Abby earned her first USBGA Champion Title by winning Grand Champion Percentage Doe at the USBGA Open Show at the 2013 Clackamas County Fair and winning Reserve Champion Senior Percentage Doe and Reserve Champion Overall Percentage Doe right below her mother, Star in the 4-H Division at the 2013 Clackamas County Fair. Abby and her daughter, Caiya also won Reserve Champion Dam and Daughter. 2015 has not slowed down her winning streak, Abby is now 1 point away from earning her "Permanent Champion" USBGA Title. 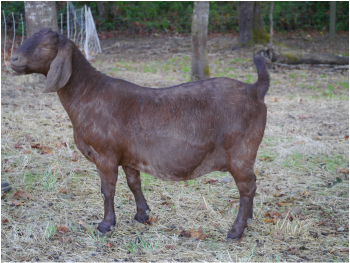 Chirp came to us as a bottle baby at just three days old from Son Sational Farms. Chirp and  Ryan became immediate friends and we can often find them getting into trouble around the farm together. She mastered the art of lock picking is the true "Scape Goat" of the farm. Her intelligence has caused us to think of new things to always keep her busy. So, Ryan has taught Chirp to jump through hoops and shake hands. Chirp gave us a beautiful set of triplets, sired by JT2 Emmett for her first kidding and raised all three like a veteran mother. All three had amazing conformation and beautiful color.
Chirp is a beautiful doe with a lot of style, length and width. She stands very correct on her feet and legs.